Second Cars Suitable For Beginners at the Cheapest Prices


The need for vehicles is definitely attached, especially to four-wheeled or two-wheeled vehicles. Well, sometimes you are confused about what car is suitable for beginners. Beginners who have never owned their own car. Here I will recommend some used cars that are suitable as first cars, with cheapest prices. 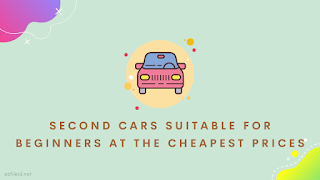 The Jazz Vtec power is bigger than the I-DSI with more complete features. In addition, the Jazz Vtec has got a bodykit around the car and this car is still suitable for everyday needs such as hanging out on campus.

Why not innova diesel? Hm, actually if you still have a budget above Rp. 120 million, it's okay to take the diesel one, but the theme is under 100 million so I get the petrol engine :(

If you want to open a travel business, sell, or just want the convenience, you can check out this innova. With a budget of Rp. 80-100 million you can bring home the Innova 2.0 G 2005 with either Manual or Automatic transmission, you know how come the gasoline is wasteful but it's not as wasteful as you think, because 1 liter can reach 9km but it depends on your feet if your feet are fond of speeding, hopefully It is economical but for its durability it is very top typical for Toyota, whether it is petrol or diesel and for transmission, it is the same as a rhino, both manual and automatic.

Actually this car is an alternative if you don't want to take the Kijang Innova option above because of age, fuel consumption, etc.

With a price range of 85 million-100 million, how come you can get this Avanza 1.3 E, Surely you are asking why don't you take the type G with a slightly old year? Well, I recommend this type E 2013 because Avanza and Xenia in 2013 already have airbags for both the driver and passenger sides and as usual this car is clear, its durability is not in doubt and you don't have to think about spare parts because even in the interior you can get these Avanza spare parts.

Bang, there is a recommendation for a sedan under Rp. 100 million or not? The one with a nice design to look at, abundant spare parts, and economical in fuel?

In the range of Rp. 100 million or less is actually a lot, bro for the sedan segment, but I recommend this Honda Civic VTI-S, bro. Why? First, because the design is still easy to see, secondly, the use of fuel is still relatively economical, the three features are similar to today's cars.

This generation Honda Civic has two variants, namely VTI and VTI-S. What distinguishes it is its features, especially safety features. I highly recommend the VTI-S variant because it has more complete safety features. Oh yes, the market price starts from Rp. 65 million to Rp. 96 million depending on the year and condition of the car.

The last position is occupied by a car which I am very surprised why this car is so hard to break down. In addition, the market price for diesel cars in Indonesia is still high, so with a budget of Rp. 100 million, you can get the middle variant of the Isuzu Panther, the LS variant, and even then the 2000s version because the Grand Touring variant of the same year is still at Rp. 130 million. Why do I recommend the LS variant? Because first, this variant is not too low, it can still be considered an intermediate variant because underneath there are still variants of SS, LV, SV, LM, and SM. Second, the LS variant for the 2000s has an automatic transmission, suitable for those of you who can't bring home the innova diesel matic due to tight budgets. There is still a panther matic and the good thing is that the Panther LS Automatic already uses a Turbo engine.

Well, thats all. Hope you find what best for you. See you in the next post :)