Hi friends, how are you? Hopefully all is well, in terms of wallet, body, and spirit. This time, I will share my experience about using 3 Microphone Condenser (condenser microphone) which is cheap but not cheap. Yes, especially if it's not Sades Orpheus, Fantech Leviosa, and the KLIO MCN-05. It's perfect for those of you who want to be a YouTuber, podcaster, or want a cover song. Actually, not only the three cheap Mic Condensers, but because I judge them not only from the price, but the completeness, features and performance of course, these are the three I got. Well, get on with it, check the discussion below! 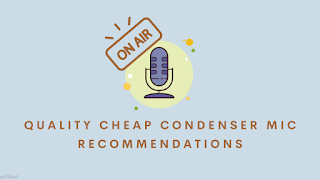 Overview of the Microphone Condenser

A good condenser mic will produce good sound too. The function of the condenser mic is to process the vocal signal to make it sound clearer. As a microphone whose function is to capture vocal sounds, this condenser will have the ability to catch even weak sounds.

For those of you who want to buy a condenser mic at an affordable price, reading this article is the right action. Here I will write a review of the 3 best condenser mic with prices starting from only 700 thousand. But I don't judge based on price alone, but rather on completeness, features, and performance as well. Here's the review!

Sades Orpheus is the highest priced condenser mic in my review. However, it is worth what is obtained. It is not wrong if Sades wrote "Premium Microphone" in its sales. Not only that, in one purchase you will get a complete package with a condenser mic, usb cable, 2x pop filters (mic & bracket), mini tripod, and full bracket set (mic arm stand, sock mount, and table clip).

On the mic there is a volume control button and echo. You can adjust the volume of the sound the mic produces directly and also add echo to the sound with the echo button. Unfortunately there is no headset/headphone port on this Sades Orpheus mic. You know, if the podcaster likes to plug the headphones directly into the mic so that the sound can be heard more clearly through the headphones. Well, this mic doesn't work like that.

With its cardioid polar pattern feature, the mic will focus on capturing 120 ° sound from the front, minimizing sound capture from other directions. The sound it produces is also good, clear and clear. You can get it with new prices starting from Rp. 670,000, - or around 47 usd.

Fantech is known for its cheap and high quality gaming products. But this time Fantech provides a condenser mic without the slightest gaming subject. But make no mistake, Fantech does that because this mic is suitable not only for gaming activities, but all sound activities. In one purchase package you will get a mic condenser, pop filter, foldable tripod, USB cable, and mount adapter. The mic and tripod are metal, so they are sturdier for the long term and look elegant.

The fantech leviosa mic has an RGB light effect, accompanied by mute, volume, and echo buttons. But the RGB light effect will be covered up if you attach the pop filter. There's also a headphone/headset port on the mic, so you can hear your voice live.

Fantech leviosa also applies the polar pattern cardiod feature, where the mic will focus on capturing sound from the front and minimizing the sound pick-up from other directions. The sound produced is also good, clear and clear. The starting price of this fantech leviosa mcx01 is Rp. 999,000, -. However, currently (27/02/21) Fantech is cutting its price with a 50% discount, bringing the price to Rp. 499,000 (around 36 usd), -. Whether this price is a promo price or it will be a permanent price I don't know. So, if you are interested maybe it is better to buy it at this time.

NYK Nemesis can be a condenser mic choice for those of you who have a mediocre budget. With a price of Rp. 375.000, -, you can get a complete package containing a condenser mic, 2x pop filters (bracket and mic), mini tripod, USB cable, mount adapter, and full bracket set (mic arm stand and table clip).

Low prices do not mean the goods are cheap. The MCN-05 Klio condenser mic also applies a cardioid polar pattern feature so that the mic will focus on capturing sound from the front. The quality produced by mcn-05 klio is also good, clear and clear. Very worth it for a package of condenser mic for Rp. 375.000,- (around 26 usd).

The three condenser mics above have their respective advantages. In terms of sound, the three are not much different from both the sound capture and the sound produced. In terms of completeness, Sades Orpheus can be an option because the complete package plus the full-metal case can last for the long term. In terms of features, the Fantech Leviosa MCX01 is superior because there is a headphone jack port so you can hear the sound from the mic in realtime. In terms of price, the NYK Nemesis MCN-05 KLIO is superior at the most friendly price.